Today, I’m giving you a guest post from Jason Holmes who has successfully gotten out of debt through debt consolidation or settlement.

While this is not a very common practice in the Philippines, it is in the USA.

So I hope my readers in America can appreciate Jason’s story and the advise he offers. 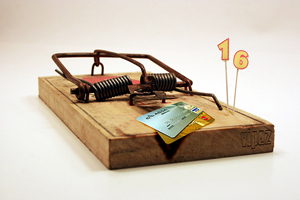 I would like to share my personal experience on how I have been successful in getting out of my debt problems.

What happened was I was not at all aware of how to manage my personal finances. I continued charging my credit cards for making small, as well as big purchases, without paying off the outstanding balances every month.

As a result, I landed into huge amount of debt on 4 credit cards.

I realized what mistake I’ve done when I finally got a call from the collection agency. And that’s the very moment I promised myself to get out of debt as soon as possible.

Here’s what I did:

Assessed my scenario and planned a budget
When I assessed my financial status, I found out that it won’t be possible for me to repay the total outstanding balance. I had to pay off about $56,000 in 4 credit card bills.

Thus, it was time to plan a budget that would help me to save more each month. I decided to lead a frugal life as much as possible and cut down all my extra expenses.

I made certain lifestyle changes like eating out only once a month. As suggested by one of my friends, I also started collecting discount coupons from newspapers so that I could use them for grocery shopping.

In the end, all these efforts helped me to save about $4,000 within 3 months of time.

Negotiated with creditors to settle debts
As it was not possible to pay off the debts in full, I decided to negotiate with my creditors to reduce the payoff amount as much as possible.

I called up my creditors, explained my financial situation and convinced them that I would have to file a bankruptcy if they don’t agree to reduce the payoff amount by at least 45-60% of the outstanding balance.

I was really lucky to have my total outstanding debt reduced by 48%. So, after reduction, I needed to pay $29,120 to settle the credit card bills.

I would like to mention that it was a bit difficult in the first few months to follow the budget strictly. However, I got motivated as soon as I was able to settle the first credit card debt. From then on, I didn’t have to struggle much and was able to settle my debts within 2 Â½ years of time.

This experience has taught me how to really manage my personal finances more responsibly.

This guest post is contributed by Jason Holmes. He is now a regular writer with Debt Consolidation Care and is also a contributory writer with other financial sites.

His expertise is woven around various aspects of the debt industry and with his e-books he tries to impart to people the different situations and simple solutions to get out of debt.

Some of his works include e-books like Credit Score The Quintessential Therapy for a Happy Pocket, Take Creditors and Collection Agencies to Small Claims Court and My Story- From Depression To a Smile.

—
Did you like his story? I did because he mentioned several important points when you’re trying to get out of debt:

Do you have your own story to tell? Then why not share them here.