What’s the difference between being frugal and being cheap? Surprisingly, when I asked my friends about this, I got different answers.

Furthermore, when I gave them several cases and asked their thoughts if it was a frugal or cheap example, they disagreed on several points.

Today, we’ll define that boundary, which separates the two. And hopefully, you’d agree with me.

The main reason why most people don’t practice frugality is because they fear that their friends will label them as cheap, stingy, or a tightwad; or should I say kuripot, tiyane, and maramot.

Now, who would want to be called that?

Anyway, so what’s the difference between being frugal (or matipid) and being cheap?

Cheap people will simply buy the lowest-priced item on the grocery shelf. But frugal people will study and compare products and buy the most economical item.

Cheap people are inconsiderate about other people. But frugal people always take into account if their thrifty habits will affect others negatively.

Cheap people are unreasonable when haggling and believe they deserve the lowest price possible. But frugal people, although usually as assertive as cheap people when asking for a discount, will never become rude. Frugal people understand that they don’t deserve a special deal all the time.

I could go on and on about this but I think I’ll just stop now and let the picture below speak about the importance of frugality.

It’s taken from the Ladora Savings Bank in Iowa, which closed during the Great Depression of the 1930s and it states… “Frugality is the parent of fortune.” 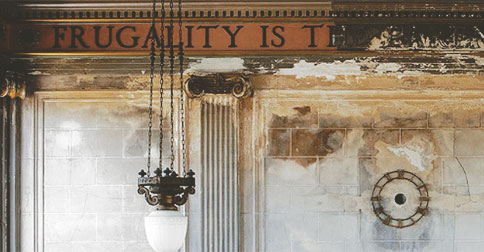 Lastly, I’d like to share with you these five situations which I gave my friends to test their mindset. You decide if the person is being frugal or being cheap. Please share your thoughts in the comments section below.

Josef
Josef and Nicole went on a date and dined in a restaurant. After their meal, Josef paid for the dinner and left no tip, he reasons to himself that the bill already included a service charge anyway. Is Josef being frugal or being cheap?

Marian
Dingdong paid Marian a surprise visit to his condominium. Marian offers him a cold glass of water and prepares the pizza leftovers from her dinner last night as snacks while they hang out in her condo. Did Marian just become cheap with what she did?

Gabby and Sharon
Gabby and Sharon received a wedding present that they didn’t particularly like. They carefully stored the item and decided to use and regift it someday when someone they know gets married. Did the couple do the right thing?

Piolo
Piolo needs to buy a new pair of running shoes because the old ones are already worn out due to regular use. After looking around the mall, he found two pairs that fit and feel right for him.

The first one is a bargain deal but the color and the design don’t appeal to him, while the second one is an expensive pair but he really loves the style and how it looks. What would be the frugal choice for Piolo?

John Lloyd
John Lloyd styles and cuts his own hair to save on salon and barbershop expenses. Although most of his friends think that he’s not doing a good job at cutting his own hair, he personally believes that his work is not at all bad.

“Saving money is more important than looking great”, he argues. What do you think? Is John Lloyd making himself look cheap?

Let me know your thoughts below!