What is the most basic rule to follow if you want to become rich? I believe it’s to spend less than what you earn.

The better version is: Spend less than what you earn and invest the difference.

But we just want the basics… the most important rule of wealth building. Which, to state it again in another way, is to learn the habit of saving money.

Now take a look at this book entitled Thrift by Samuel Smiles. 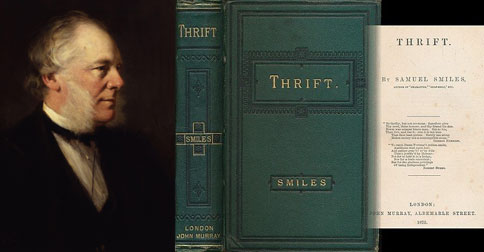 Yes, your observation is correct. The book is old.

Samuel Smiles published this book back in 1875 – that’s 140 years ago! It’s about personal finance, and below are two paragraphs taken from the first chapter: 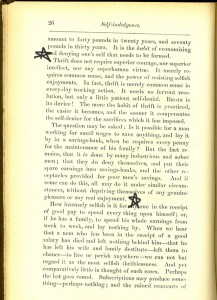 Thrift does not require superior courage, nor superior intellect, nor any superhero virtue. It merely requires common sense, and the power of resisting selfish enjoyments. In fact, thrift is merely common sense in every-day working action. It needs no fervent resolution, but only a little patient self-denial. Begin is its device! The more the habit of thrift is practiced, the easier it becomes, and the sooner it compensates the self-denier for the sacrifices which it has imposed.

The question may be asked: Is it possible for a man working for small wages to save anything, and lay it by in a savings-bank, when he requires every penny for the maintenance of his family? But the fact remains, that it is done by many industrious and sober men; that they do deny themselves, and put their spare earnings into savings-banks, and the other receptacles provided for poor men’s savings. And if some can do this, all may do it under similar circumstances, without depriving themselves of any genuine pleasure or any real enjoyment.

So, if you were to summarize what the two paragraphs above are saying into one sentence, what would it be?

Looks like after so many decades, regardless of the generations that’s passed, the rules of wealth is still the same back then as it is now.

So quit looking for the secrets of money, and stop wasting your time on get-rich-quick schemes, because all you need to do to become wealthy has already been revealed; you just have to learn, accept and apply it to your life.

By the way, you can click the photo of the excerpt page above for a larger image. And also, you should know that the book is free on Amazon Kindle, just in case you want to read it.