I admire people who have six-pack abs. As someone who’s been trying to get those ever since college, I know how it’s almost impossible to achieve those cuts.

The closest I’ve been able to get was a flat tummy during my senior year, which quickly disappeared after I graduated and started working.

And after that, the pursuit of the six-pack abs took a backseat and got replaced by my new personal goal of becoming rich.

But looking back, and remembering all the advice I got from the guys with awesome six-packs, I realized that regardless if it’s a physical challenge such as getting fit; or a financial goal such as getting out of the rat race–the basic principles remain the same. 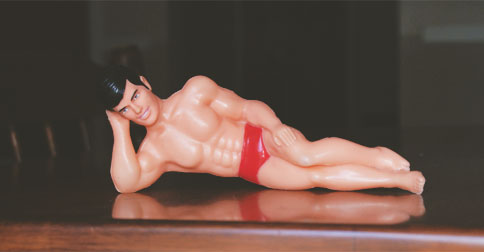 It’s not just about doing situps or ab crunches

Back then, I thought that doing 100 sit-ups every day will eventually get me those six-pack abs that I wanted. But a guy at the gym where I used to work out told me that I also needed to do cardio exercises, lift weights and start watching my diet.

He asked me if I’ve ever seen a fat guy with six-pack abs, or if I find skinny people with six-packs as good-looking as those who are physically fit. He says the abdomen is just one part of the body, and changing it without improving the rest is futile and pointless.

Indeed, becoming wealthy is not just about learning how to invest or starting a business, as most people think.

It should be a total financial workout – from changing one’s mindset and living below your means, to learning practical money management and creating multiple sources of income.

A varsity friend, and now fitness instructor, created a workout plan for me back then. It was a simple program that started with 10 ab crunches 3x a week, and a 20-minute brisk walk every day. But week after week, the load increased and the brisk walking became running.

I religiously followed the program for one semester, and that got me my “flat stomach achievement”. Unfortunately, academics and graduation got in the way, so I had to eventually stop doing it.

But the lesson and the power of starting small to maintain one’s motivation has stuck with me through these years.

Don’t be obsessed on getting that six-pack abs

A dorm mate of mine who’s now a yoga instructor has had a flat tummy for as long as I can remember.

If you ask him how to get those six-pack abs like his, he’ll answer he doesn’t really know because it “just appeared” when he decided to change and commit to a healthy lifestyle.

And that I believe, is the best lesson of all

Oftentimes, we become too focused on specific financial goals that we forget to consider the whole picture. We spend time and countless hours working – so that we can afford to buy that car, that house, or go on that dream vacation.

We ignore the macro view and fail to see that all those dreams are attainable and will easily follow if we change our lifestyle and work on better financial habits.

I started running again early this year, and can now do almost 50 ab crunches per workout. I’m now also more careful with what I eat and do yoga once a month.

Will I be able to finally get those six-pack abs? Only time will tell… but I’m not waiting. It will happen if it will happen.