The Wolf of Wall Street is a film based on a book of the same title, and is about the life and times of former stockbroker, convicted criminal and now, author and motivational speaker, Jordan Belfort.

In case you haven’t seen the movie… yes, you read that right.

Jordan Belfort was a stockbroker, who got convicted of fraud crimes related to stock market manipulation, among others. And then, after serving his sentence, went on to become a sales trainer and motivational speaker.

Quite a life, right? 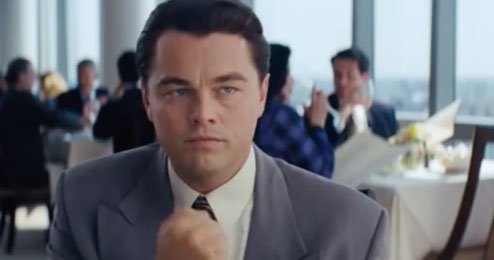 Today, I’d like to talk about a scene in the movie that really struck me because it implicitly taught the audience an important lesson about investing.

What was this scene?

It occurred when Jordan Belfort was in a restaurant with Mark Hanna (played by Matthew Mcconaughey), who was his boss at his first job in the stock brokerage firm, LF Rothschild.

All of my friends, and probably most of those who watched The Wolf of Wall Street, could only remember the “Money Chant” from that scene:

The most important investment lesson you should have learned from the movie happened during their conversation before the scene above – when Hanna told Belfort the secret to becoming rich as a stockbroker.

I’m your stockbroker, you’re my client. Customarily, part of my job would be to give you advice when and what stocks to buy, and when to sell those shares.

Market dips by June, and as per my advise, you bought JFC at P125 per share. Then I told you to sell them in August, at the peak of P175 per share.

The question now is, what would you do?

Most people would choose “A” and let the earnings compound. The more conservative ones will choose “B” and protect part of their earnings. However, I have yet to meet a person who would choose “C” – the third option.

I believe the person who would choose to withdraw all their money and close their account is either crazy or one very smart investor – and here’s why.

Keep the clients on the Ferris Wheel

Let’s go back to the restaurant scene and watch the slightly longer clip below. Turn your volume up to hear the conversation clearly.

Revolutions… that’s the name of the game.

From January until August 2013, how much money from the stock market have you “physically” put inside your pocket? The answer is ZERO, because your money was just all in your stock market account.

Meanwhile, from the same length of time, as your stockbroker, I have earned around P10,000 commission from the brokerage fees which you paid from both buying and selling JFC shares.

And this was Hanna’s advise to Belfort – to keep the clients on the ferris wheel – so he could continuously earn from commissions while his clients remain happy just seeing the paper gains in their accounts.

Paper gains which their clients could neither touch nor spend anywhere else.

The most important investment lesson

First of all… no, your stockbroker is not evil. He or she is actually one of the best people to ask about stock market advice.

What a lot of people miss out on when investing in the stock market, or in mutual funds, or UITFs or in everywhere else is having an investment objective.

Have a goal before you invest.

The reason why you invest is to be able to afford your dreams, so before investing – you should first define your goals.

What do you want to buy? Where do you plan to spend the money on? Answer these questions and it will make all the difference.

If you’re investing because you want to have P500,000 as capital for a grocery store business, then choose “a” – keep the money in the account, and continue following the advise of your awesome stockbroker until its value reaches half a million – then you withdraw.

If your dream is to travel around Southeast Asia on a P190,000 budget, then withdraw the money, pack your bags, board a plane and use the excess P3,000 to buy pasalubong for your awesome stockbroker. 😀

Remember… don’t get stuck in the ferris wheel.