Keeping a piggy bank is not just for kids.

Anyone who wants to save money can do what probably is the most straightforward and simplest way to be thrifty – and that is to have a piggy bank at home.

A couple of nights ago, I had the pleasure to open my piggy bank which is already full. Yay!

My piggy bank is not your usual piggy bank. Why? Because it’s a recycled Pringles container. 😀

Frugally speaking, why would I spend to buy an actual piggy bank when I can just reuse this, right?

I’m not good at doing crafts so you have to forgive the very crude coin slot I managed to slice on the cover with some scissors. 😛 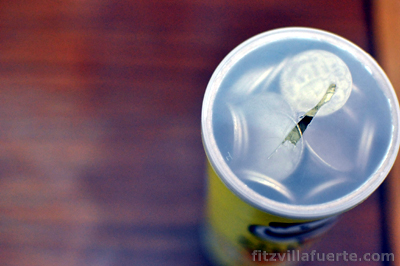 I started using this homemade piggy bank around first week of June 2010. I decided to make things interesting and make this a Picky Piggy Bank.

What’s that? Well, basically, I followed three rules in saving money for this:

Pretty simple right? But I should tell you it was not easy at first. 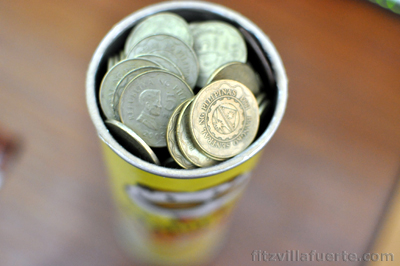 A few weeks into it, I had several days when I forget that I was supposed to keep those 5-peso coins and made an oversight of spending them.

Other times, I would forget to “deposit” the coins I collected into the piggy bank, which caused my coin wallet to weigh extra heavy the next day – not comfortable at all. 🙁

But alas, I got the hang of it and would always remember. And then new challenges faced me.

Parking in public places in the city, you would always have those people who assists you in backing up your car. Customarily, my “tip” to them would be… you guessed it, 5 pesos.

And the same goes for gas attendants who would check my car or clean my windshield whenever I pass by the station to get fuel. 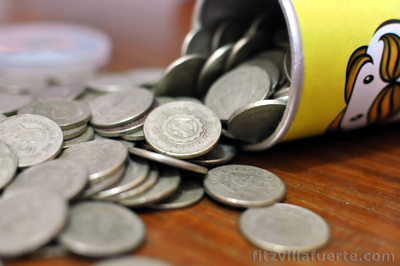 There was a time when all I had left were 5-peso coins and my smallest bill was 50 pesos. Surely, one would not give a 50-peso tip for those tasks!

So, during those times and similar situations, I would just break the rule and spend the coins. (It’s my rule anyway :P)

Anyhow, so there I was, feeling like a kid and happy with my small accomplishment. I organized my coin savings and counted how much I was actually able to save in a span of around five months. 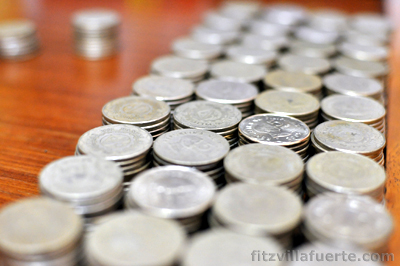 My total? P2,085.00 – more than enough for me to buy a round trip seat-sale plane ticket to Iloilo next year for the Dinagyang Festival, or maybe Cebu for the Sinulog Festival.

Or I could save all of it and do this again for another five months and hopefully, by April 2011 – I’d have around P4,000 to spend for a beach vacation during Holy Week.

Of course that’s just me daydreaming, and if you know me well enough – you’ll know that half of this will go to my savings account while the other half, will be spent on an expensive dinner. 😀

Anyway, how about you? Do you keep a piggy bank?

Get more stories like this by subscribing to Ready To Be Rich.