I was at Powerbooks yesterday. I arrived early for a meetup, so I decided to pass the time inside the bookstore.

One of the books that caught my attention was “The Tipping Point: How Little Things Can Make a Big Difference” by Malcolm Gladwell.

Are you familiar with this book?

The Tipping Point is basically about change and social epidemics.

It tries to give us a “new way of understanding why change so often happens as quickly and as unexpectedly as it does”.

It likewise presents thoughts and ideas that show how big things can come from small and unnoticeable causes. The book is quite interesting, I must say. 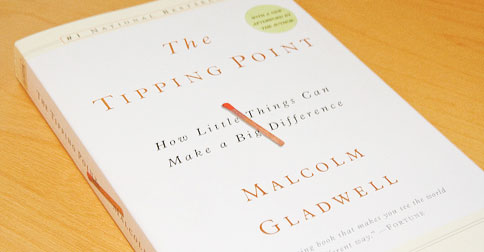 I browsed through the pages of the book, and it made me think about the phrase tipping point.

Because I’m an engineer, I imagined a cylinder laid down on a horizontal plank. Slowly, a force raised one end of the board.

This continues until the maximum angle for impending motion is reached, and gravity takes over and causing the cylinder to roll.

Can you think of other ways to physically describe a tipping point?

However you describe it and whatever you might call it – the moment of critical mass, threshold value, the boiling point, etc. We must grasp not only the concept of tipping points but we also learn how this idea applies to our life.

Not so long ago, I was your typical corporate slave. I was a young urban professional walking the streets of Ortigas every day and working hard for the money.

Back then, I believed that the only way for me to become rich and financially secure is to constantly get promoted at work. To climb up the corporate ladder and receive higher salaries.

For several years, my life was a routine – sleep, eat, work on weekdays, and party hard until the next morning on weekends.

I thought I was living “the life”. But I was wrong because more often than not, I felt empty and without direction.

I asked myself, “What’s wrong?”

The question lingered inside my head. However, I was too busy “living my life” to really think about the answer.

Unexpectedly, the answer to my question came one afternoon during a conversation with a friend. It was a moment I would always remember because it was when I was pushed over my financial tipping point.

I was hanging out and having coffee with him when I mentioned that I wanted to quit my job and work for another company. I told him that my prospective position pays better than my current one.

Surprisingly, he showed little enthusiasm for my plan. Instead, he told me something that changed my life forever.

In the next few minutes, he talked to me about investing and the concept of passive income.

I went home that day thinking about everything my friend said. I assessed my life and realized that it’s been lacking a concrete financial plan.

Sure, I can hop from one company to another and get better and bigger salaries. But in the end, nothing will really change. I’m still a corporate slave daydreaming of the things he wants inside his cubicle.

That night, before I went to sleep, I resolved to learn more and do more for my finances. And since that day until now, I have never stopped.

What about you? Did you experience such financial tipping points? Can you recall an exact moment in your life when you realized that you seriously need to start paying attention and planning your financial future?