Last weekend, there was a Crocs Mega Sale at the Megatent in Ortigas, Pasig City. The event promised up to 80% off the regular prices of their bestselling footwear.

I originally had no intention of going but a friend who was one of the organizers of the event called me up Sunday noon and asked why I haven’t been there yet. She said that she’s been waiting for me since Friday and I should really come and take advantage of the huge bargains they’re offering. After some thought, I told her that I’ll try my best to come.

Meanwhile, another friend of mine was celebrating her birthday and she was having a party that evening. Since her house was just some walking distance from the Megatent, I decided to go to the Crocs Mega Sale before I went to her place. 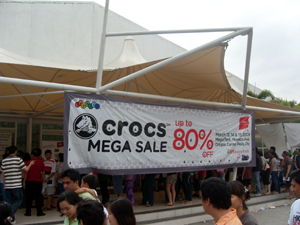 I arrived around 4:30 in the afternoon and the place was really packed. It was such an overwhelming sight. Everyone seemed to be on a treasure hunt. People of all ages were there – all minding their own business and searching through the piles of footwear everywhere. 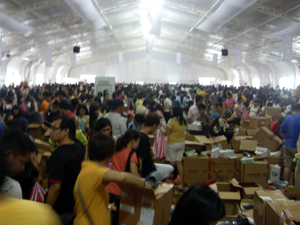 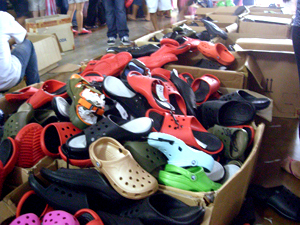 While I was walking around with my friend, she told me to look through the piles of footwear and see if I’d find something I like. It didn’t took me long to spot a nice pair of flip-flops. I was about to show it to my friend when I realized that she already took off to attend to some matters.

I foolishly thought that she was going to give me a free pair but her “sudden” disappearance told me otherwise. As I laughed with myself upon this realization, I can’t help but think if I should just buy the pair instead.

I made a mental inventory of my footwear at home and realized that I don’t really need new flip-flops nor sandals. So despite the fact that the Crocs pair I’m holding had a ridiculously low price, I firmly decided against buying it. Here’s a shot before I tossed it back to the pile. 😛 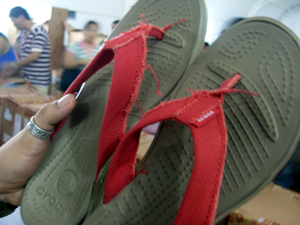 I was about to find my way out of the Megatent when I saw a familiar face in line at the cashier. It was a friend way back from college. I went towards him to say hi and of course, ask him how he’s been.

As we were talking and reminiscing our university days, I noticed that there were less people in the credit card lane than the cash lane. But more than that, I saw something that caught my eye. 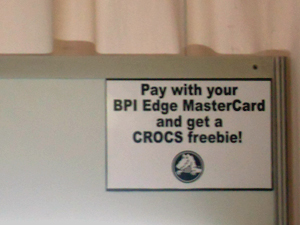 That’s when I asked my college buddy if he’d want to give me his cash instead and I’ll just charge his purchase on my credit card. It was a win-win situation actually and for that offer, I scored myself some freebies including this Crocs keychain. 😀 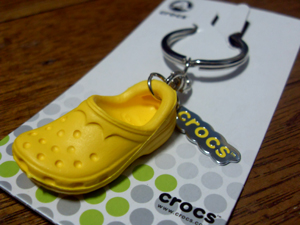 It was around 6:00 when I left the Megatent. As I walked towards the birthday party I’m attending, I realized that:

I realized that last one when I saw a Chinese couple carrying six large plastic bags of Crocs footwear towards their car. I don’t believe that they’ll be needing all those pairs so I assumed that they must have plans of selling them to relatives and friends. But hey, that’s just me. 😀

If you’d like to receive more stories about personal finance and money saving tips, then please consider subscribing to Ready To Be Rich.