A television commercial by McDonald’s entitled Tweens has just been released in the country.

The ad has created various reactions from its audience, specially parents, regarding the ad’s story line.

Some say that it’s sweet and endearing while some say it’s awkward and disrespectful.

Have you seen that McDonald’s TVC? If not, then here it is below. This will give you an idea who the tween market is.

The Tween market is one of the most active emerging market in recent years and marketers are discovering that there’s money to be made here.

Tweens basically refer to prepubescents or “children” aged 8 to 12 – emphasis on the quotes for they actually do not like to be called children anymore.

Tweens are no longer little children, but not yet teenagers. And one of their most important issue is their sense of identity.

And that weakness has been the marketing industry’s best selling point.

Businesses and marketers has found a goldmine in selling to the self-conscious tween market the lifestyle of a young independent adult.

Tweens like to be “cool” and the acceptance of their peers is likewise one of the issues that they encounter everyday.

By giving them products that help them become “sophisticated” and “cool”, one will find that it will readily be accepted by the tween market – which can even reach to a point of being a personal necessity for them (i.e., clothes that teen stars are wearing).

However, it should be noted that media and culture really plays a big role in determining what’s “cool”.

Tweens are very perceptive of what’s desirable and what’s not in their social circle. And usually, the best way to get this information is to do market research.

Nevertheless, one common factor that’s been found which directly relates to what’s “cool” among tweens is that idea of independence.

Treat them as a young adult capable of making their own decision and they will positively respond to you. 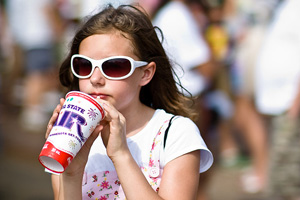 While tweens are, in reality, still very much financially dependent on their parents – marketers have found that this demographic actually has a substantial amount of purchasing power, thanks to their strong ability to save their allowances.

But more than saving, tweens know that if what they want is something that their parents can afford and will not disapprove of, then all they have to do is simply ask their parents to buy it for them.

This is why apparel is one of the top products for tweens; it’s because parents would consider clothes a necessity for their kids while the tweens can freely choose the brand and the style – which would of course depend on what’s currently “cool” among their peers.

Currently, tween girls are being portrayed in advertisements as “young ladies” with an early sense of style and fashion. They may be already attracted to boys but there is always more emphasis to girl friends, pop stars and shopping.

Meanwhile, tween boys are usually shown as independent and strong-willed individuals. They may already be interested in girls but for most part, they are busy with sports, video games and hanging out with friends.

Such is the most basic approach in selling to tweens. And one way to successfully market your product is to wrap it up in a package that is both cool to their peers and acceptable to their parents.

Let me end with another McDonald’s TVC from not so long ago which likewise portrayed a storyline about tweens.

I hope that in a way, I have helped you understand how this target market thinks and has given you an idea how to successfully sell and market your products to them.

Get to know more target markets by subscribing to Ready To Be Rich.