For today’s Reader Mail, I will answer one of the comments left by a reader in one of my posts about the BDO: Unit Investment Trust Funds.

“MANROJ”, told me about his BDO Peso Balanced Fund investment and asked for advice on what he should do.

I am certainly not a certified financial analyst nor a wealth management adviser, but I hope that my take on his concern, which is purely based on personal opinion, could help in some way.

And of course, in the end, one should always seek professional help when it comes to such money matters.

With that said, let me now share what he wrote:

My question is, how do you see the trend for the BDO Peso Balanced Fund? Do you think this will steadily increase in the months to come, or should I already pull out my investment while I am still at a gain?

First of all, I would like to congratulate him for the courage and patience he’s shown in his investment. Seeing the NAV go down with each passing month can be nerve-wracking and I know some people who would have pulled out of the investment with that scenario.

With medium to high risk investments, having a long investment horizon is really important. Having the ability to “ride the market” increases your risk tolerance and it’s something that everyone should remember when going into paper investments.

Now, let me go into detail to MANROJ’s concern, without getting too technical for the benefit of those who are not familiar with how UITF’s work.

Because of his “bad” experience with the fund performance from the past 3 years, he is tempted to sell those units now that it has finally, earned. Do you think it’s a good idea for him to really sell now?

The very first question he needs to answer is what is his investment objective. Where is he planning to use the money? Is it to buy a car? For a vacation? Downpayment for a house?

Knowing this would really help determine if the BDO Peso Balanced Fund is the right investment to achieve those goals. And assuming that it is, then having a specific amount in mind will help in determining when to “cash out”.

For example, if his objective is capital appreciation to start a business with a determined capital of P500k, then he should cash out when the NAV reaches 3,105.60.

And that brings us to the next question, when will it reach that value?

The answer is, nobody can tell for sure, sorry. It can be in the next year, in a couple of years or more.

But in any case, let’s take a look at how the BDO Peso Balanced Fund has performed since 2004 (source): 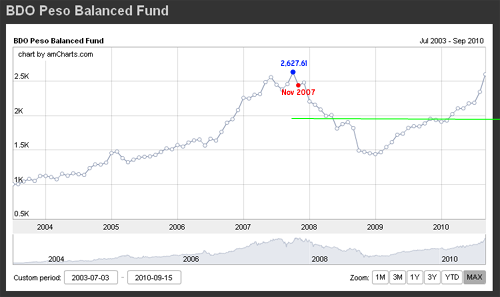 And as you can see, it is now approaching resistance to its previous high of 2,627.61 which occurred last October 2010. If the price goes higher than that, then it would most likely continue to go up.

If it doesn’t, then it will go down to around NAV 2,000.00 (green line) – afterwhich, the direction could possibly go up or down, which will largely be dependent on the “emotion” of the investors to the economy.

So what should MANROJ do?

The last piece of advise is something MANROJ should consider. In my opinion, the best way to invest in paper assets is to do it little by little, on a regular basis. Putting all the 400k in one go was a bad decision (sorry).

But that’s in the past now, the lesson here is to learn from that mistake and focus on the future. 😀

Again, I am not a technical analyst and this is just based on my opinion and a personal strategy I use to look at investment performance.

To my readers, please feel free to give your own interpretation of the graph, point out mistakes in my calculation and dispense your own advise so we can have a healthy discussion about this. Thanks!