I received a text message from my mother recently. She said that my Feng Shui horoscope says that I’m going to be lucky.

I’m not a superstitious person and I always take such predictions with a grain of salt, but I don’t want to curb her optimism so I texted back and replied, “Yes, that’s why I’m starting a new business soon!”

To which she replied, “Don’t forget to play the lotto. You might just get lucky.”

I know for a fact that the chances of struck by lightning is higher than winning the lottery jackpot. And that’s one of the reasons why I don’t really play the lottery. But nevertheless, it really got me thinking.

Despite the obvious odds, why do a lot of people still play the lotto? I can only conclude that hope is really a strong motivator.

I was hesitant at first if I’m going to write about this. How many personal finance blogs have you read that actually gave tips on how to win the lottery?

I’m sure not much or maybe none at all. But in the end, I decided to go ahead and dispense some mathematically proven strategies on how to increase your chances of winning the lotto.

Despite the low probability of hitting the jackpot, many would still continue to buy a lotto ticket. So let’s just make your odds a bit higher.

But before we go into that, I would like to give some reminders. 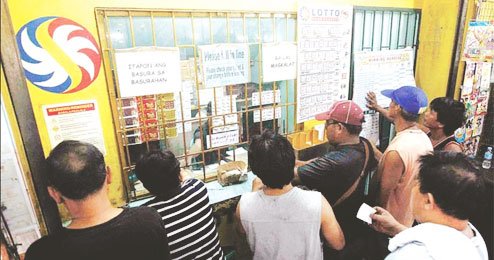 Before You Play the Lottery

First, you don’t need to play often or bet on a lot of combination. The chances of winning the lotto jackpot if you place several bets or if you play everyday increases only by a very, very small percentage. It’s really, really close to zero.

Second, play the lotto only when you have extra money. If you really want to place a bet, then take it out of your entertainment budget.

Third, take care of your ticket. Don’t keep it in your wallet; put it in a safe place.

And lastly, remember to check if you won. I actually have a friend who discovered that he won a small payout several months after he bought the ticket. He hid it inside a book and totally forgot about it until he decided to read that particular book one afternoon.

So, without further ado, here are some number combinations that are most likely to come out in a six-ball lottery draw.

This analysis was done using probability formulas and was checked for validity against the Philippine Lotto 6/42 winning number draw results from 2006 and 2007 as provided by the Philippine Charity Sweepstakes Office website.

If you understand the math behind the strategy, then you can apply them in other lotto games such as the Ultra Lotto 6/58, Grand Lotto 6/55, Super Lotto 6/49, Mega Lotto 6/45.

More than 70% of the winning combinations in the Philippine Lotto 6/42 in the mentioned years are in this category with the 3-3 (three odd numbers and three even numbers) combination leading with more than 30% of the draws.

Sum of Numbers
Your chances of winning are higher if the sum of your number combination is within the middle range of all possible sums. To compute this, just add the first six numbers and the last six numbers of the lotto balls and divide by two.

Low-High Combination
Divide the highest ball number by two and you have the border for your low numbers and high numbers. For the Philippine Lotto 6/42, it’s 42 divided by two or 21.

This means that the numbers from 1 through 21 are low numbers while the upper range of 22 through 42 are the high numbers. Just like the odd-even combination, probability shows that it is more likely that the low-high combination of the winning results are either 2-4, 3-3 or 4-2.

For the Ultra lotto, the low numbers are 1 through 29, and the high numbers are 30 through 58.

Again, more than 70% of the results from the years 2006 to 2007 follow this pattern with the 3-3 (three low numbers and three high numbers) attribute showing in more than 25% of the winning combinations.

These three are the major patterns which you should always consider. Check your lotto numbers if they pass these three mentioned characteristics.

Other Patterns to Consider

Here are other number patterns worth considering.

Consecutive Numbers
It is unlikely that the winning lotto draw result will have four or more consecutive numbers.

Number Group
It is unlikely that the winning lotto result will have five numbers which belong to the same number group (five single-digits, five tens or five 20’s and so on).

Last Digits
It is unlikely that the winning lotto result will have four numbers which have the same last digits.

These six rules are basically your best tools in evaluating if your number combination has a good chance of winning. Please remember that these are mere guidelines and does not guarantee that you will win.

Mathematically speaking, the pattern of 1-2-3-4-5-6 has exactly the same chance of winning as any other random combination.

So if your favorite numbers, your birthday, the ages of your family members, or your wedding anniversary does not fall into these suggested patterns, don’t fret, you can still bet on that.

In the final analysis, even if you don’t win, be happy with the fact that your money will be going to charity and will be used to help other people in need.