Last night, as the iPhone 5 was being officially launched to the Philippine market, a friend of mine was seriously contemplating where he should buy his iPhone 5.

He was looking over the Globe and Smart offers, as well as checking out the prices at online classifieds and group buying sites.

After a few moments, I told him that choosing would become easier if he made a spreadsheet.

He smiled and fired up his Microsoft Excel and began thinking loudly.

“The Black 16GB iPhone 5 is selling for SGD 948 at the Singapore Apple store, which is roughly P32,000. That’s the cheapest I found, but I have to pay in cash because I’ll be asking a friend there whose coming home for Christmas to buy it for me.”

“My second option is to buy from either Globe or Smart – and their prepaid units cost P35,400 and P33,600 respectively. It’s more expensive but I can have it at zero percent interest installment on my credit card for 24 months.”

I told him to write down the pros and cons of both choices and he came up with this.

Buying the iPhone 5 in Singapore

Buying the iPhone 5 through Globe or Smart

I asked him if the network lock was important and he said, “Not so much. I can always have it unlocked anyway in Greenhills.”

“Well, that’s true, but that could void the warranty of the unit,” I said to him. But in any case, I then concluded that the financial aspect of the purchase is the only consideration for choosing where to get his unit.

I then took his laptop, and made this table: 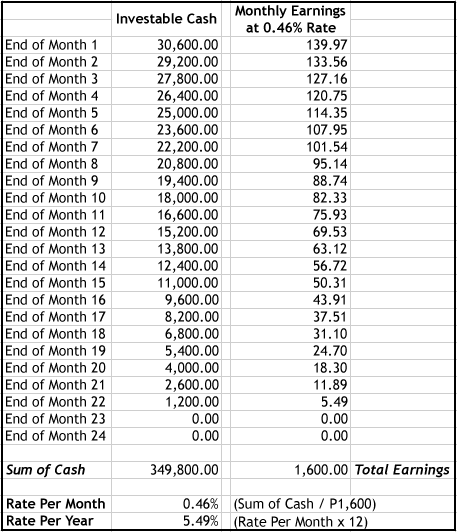 “How did you get that?” he asked. So I explained…

A 0.46% rate is approximately 5.49% per year. If you invest the money in a UITF or mutual fund which usually earns between 8% to 15% a year, then you’re actually saving more money by getting the installment plan.

But remember – you have to invest the money, or leverage your cash to make income. Otherwise, the cheapest option is to just pay in cash.

Friend scratches his head… then asked me, “So what should I do?”

“Ask yourself if you really need an iPhone 5. If not, then just invest your money.

But if you must, then I suggest you apply for a postpaid plan from either Globe or Smart. Know your mobile service requirements and choose which among their packages suit you best. It’s the cheapest option actually.

If you want to stick to using prepaid, then buy the iPhone 5 from Singapore because realistically speaking, earning 5.49% per year income from a UITF or mutual fund is only possible for medium and high-risk investments – and with a 2-year investment horizon, that’s improbable to achieve in my opinion.

Which leads you to the final option, which is to use the “investable cash” to earn the P1,600 difference, such as buying and selling stuff. Easy to do if you have the time, which I know you don’t.”

Author’s Note:
The figures above are rounded and simplified calculations. Tax deductions, sales loads and other hidden costs are not included in the investing income computations. Also, I am neither promoting Smart nor Globe. 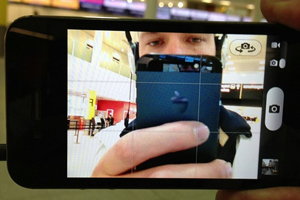 Choosing Between Cash and Installments

When faced with the decision between paying in cash or through installments, the best option is usually to pay cash up front, except when:

The cash price is available for installment at zero interest.

My gym membership costs P13,500 a year. I can pay that in cash up front or choose to pay P4,500 per month for 3 months. Of course I chose the 3-month installment plan because the cost is the same, but easier in the pocket.

You’re buying something that will create income for you, and the realistic potential rate of return can cover the difference between the cost of paying cash upfront.

She then used her “investable cash” to buy cupcake ingredients where she made P3,000 net sales income immediately. Doing that allowed her to cover the P2,500 “extra cost” for getting the installment plan.

If she paid in cash, she would have no “extra cash” for buying her ingredients and would have earned much less. Paying in installment allowed her to produce more and earn more.

You actually can’t afford to pay in cash.

Leveraging debt can be risky, and the only reason why you should do this is because you’re confident that you can afford the installment payments until the very end.

Of course, it helps if again, you’re buying something that will make you money. But if you’re just buying a luxury item, then it may be better if you just wait until you can afford to pay in cash up front.

If you did, then please share it with your friends, specially those who are thinking of buying an iPhone 5 (just kidding) – just share it to your friends (period). 😀

And if you want to receive more money management articles like this one, then please subscribe to Ready To Be Rich.