A successful entrepreneur is a sum of a lot of things.

Creativity and critical-thinking, focus and determination, passion and hard work – just to name a few.

But underneath all these qualities, there exists three belief systems that usually determine whether an entrepreneur will fail or succeed in the end.

Belief systems that cycle through the entrepreneur’s mind; which provides the fuel that moves him into action.

First is the entrepreneur’s belief that his idea is awesome; that he just thought of a product or service that could change the world.

Second is the entrepreneur’s belief in his own awesome capabilities; that he has the resources, skills and talents to turn that idea, a reality.

And the most important third, the belief of his loved ones that he is awesome; so that when things are looking down, there will be someone who will remind him that he can make it.

Examine the flowchart I made below and follow the journey of how a business idea becomes a successful reality; and how it sometimes end as a failed dream. 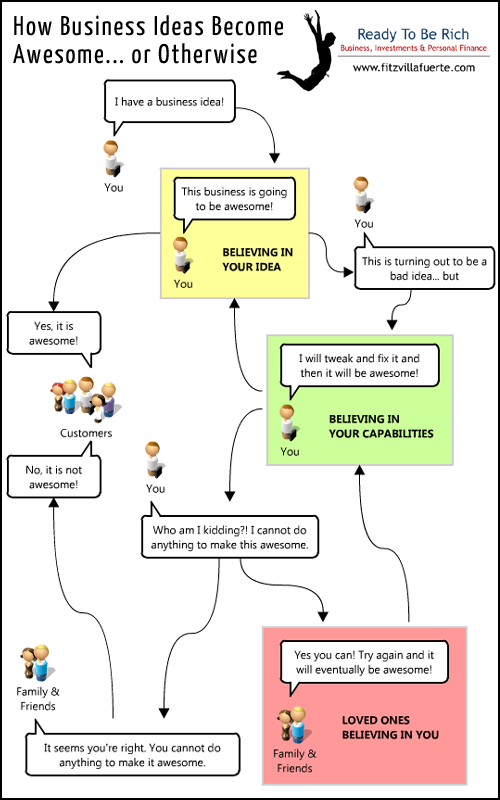 The flowchart above not only shows the importance of having these belief systems in your life if you want to pursue entrepreneurship… but also, it reminds us how our belief in others, can influence them to become a success in the end.

Be awesome today and subscribe to Ready To Be Rich, because I will always believe in your success.