I had a few hours to spare before my next meeting. I planned to wait at a coffee shop but realized that I was just several minutes away from the hospital where a friend worked.

So I called him, an ER doctor, and asked if he was busy. He wasn’t but he doesn’t want to leave and meet me outside. Which was totally fine because I actually wanted to hang out at the hospital.

Not long after, we were seated adjacent to the nurse triage station and catching up with our stories. When suddenly, an ambulance arrived.

A few seconds pass and paramedics brought in an unconscious man who had blood all over his face. A car accident, I heard.

Total wreck, broken ribs, internal bleeding, driving alone — phrases I picked out from the voices I heard as I walked to the side and out of everyone’s way.

From afar, I saw my friend in action as he calmly examined the patient. Then with clarity and certainty, proceeded to give instructions to a nurse and another doctor.

It looked like a scene straight out from Grey’s Anatomy, and I felt amazed, but also guilty for taking pleasure at the expense of an injured man.

As they started to move towards the operating room, my friend glanced up towards me. I smiled, gave him a “You can do it!” look with two thumbs up, and gestured that I’m leaving to let him work.

He smiled and nodded in acknowledgment. Then a few minutes after, I’m sitting in a cafe, replaying in my mind the scene I just witnessed back at the emergency room and admiring how calm my friend was amidst the chaos of the situation.

Every day, ER doctors face patients at the brink of death. Much more are paramedics and EMTs, who will sometimes have to do their job amidst chaos and total carnage.

Then there are firefighters, who without hesitation, would run towards a burning building. And military professionals, who bravely stare death in the face during gunfire.

Are these people naturally born with that tremendous calm and courage?

They might have some natural aptitude, but as my friend once shared with me: “I was so terrified during my first day at the ER that I almost passed out. I will never forget that day because I actually cried when I finished my shift.”

Indeed, before becoming strongholds of calm, clarity, and certainty, all of them were once a bucket of fear and panic.

And it took training and practice to get them to where they are now. They equipped themselves with knowledge and more importantly, practiced deliberately in these stressful situations until it became second nature to them.

They spent countless hours studying and years of training before they could achieve calm, clarity, and certainty. 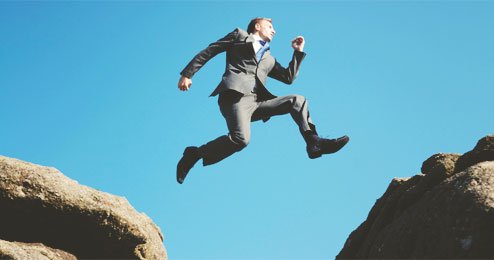 Be afraid but do it anyway.

In the realm of business and finance, everyone is afraid to lose money.

Find a savvy entrepreneur or a seasoned investor, and they will confess that they were once a bucket of fear and panic when they started. But they never let that paralyze them.

They read books, attended seminars, and learned from mentors to train their minds. Then they put themselves out into the world, took risks, invested, started a business, and challenged themselves to grow through difficulties.

Now, they don’t flinch amidst the chaos of extreme business competition; nor panic when markets and economies become volatile. Through training and practice, they have learned how to excel.

And that’s what you should do too.

It’s okay to be afraid, but you should do it anyway. Because calm, clarity, and certainty can only be achieved if you work for it and face your fears.