Just the other day, I was organizing my book shelf when I saw a novel which my Humanities teacher assigned for us to review back in college.

It was Viajero by F. Sionil José.

This novel is about the Filipino diaspora as seen through the eyes of an orphan who is brought to the United States by an American captain. The plot is closely similar to the cathartic experiences of David Poarch, if you know him.

Anyway, browsing through the pages of the book, I’m saddened by the fact that much of the details of the story is now lost in my memory. Nevertheless, I do distinctly remember being close to tears back then upon reading one of the climactic chapters of the novel.

As I went on and finished my chore, I am reminded of another work by F. Sionil José. It’s an essay which I read as a forwarded email years ago. And so I went to my computer and logged in to search for that archived message.

Thankfully, it was still there and I’d like to share that composition here. It’s quite long but please take some time to read it and hopefully, it will inspire you to become an agent of change for other Filipinos. 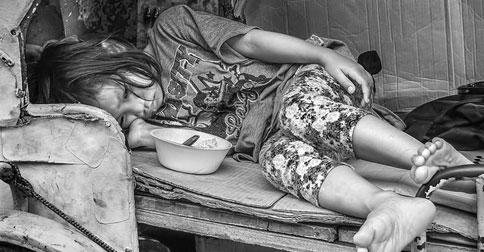 Why Are Filipinos So Poor?

What did South Korea look like after the Korean War in 1953? Battered, poor – but look at Korea now. In the Fifties, the traffic in Taipei was composed of bicycles and army trucks, the streets flanked by tile-roofed low buildings. Jakarta was a giant village and Kuala Lumpur a small village surrounded by jungle and rubber plantations. Bangkok was criss-crossed with canals, the tallest structure was the Wat Arun, the Temple of the Sun, and it dominated the city’s skyline. Rice fields all the way from Don Muang airport – then a huddle of galvanized iron-roofed bodegas, to the Victory monument.

Visit these cities today and weep – for they are more beautiful, cleaner and prosperous than Manila. In the Fifties and Sixties, we were the most envied country in Southeast Asia. Remember further that when Indonesia got its independence in 1949, it had only 114 university graduates compared with the hundreds of Ph.D.’s that were already in our universities. Why then were we left behind? The economic explanation is simple. We did not produce cheaper and better products.

The basic question really is why we did not modernize fast enough and thereby doomed our people to poverty. This is the harsh truth about us today. Just consider these: some 15 years ago a survey showed that half of all grade school pupils dropped out after grade 5 because they had no money to continue schooling. Thousands of young adults today are therefore unable to find jobs. Our natural resources have been ravaged and they are not renewable. Our tremendous population increase eats up all of our economic gains. There is hunger in this country now; our poorest eat only once a day. But this physical poverty is really not as serious as the greater poverty that afflicts us and this is the poverty of the spirit.

Why then are we poor? More than ten years ago, James Fallows, editor of the Atlantic Monthly, came to the Philippines and wrote about our damaged culture which, he asserted, impeded our development. Many disagreed with him but I do find a great deal of truth in his analysis.

This is not to say that I blame our social and moral malaise on colonialism alone. But we did inherit from Spain a social system and an elite that, on purpose, exploited the masses. Then, too, in the Iberian peninsula, to work with one’s hands is frowned upon and we inherited that vice as well. Colonialism by foreigners may no longer be what it was, but we are now a colony of our own elite.

We are poor because we are poor – this is not a tautology. The culture of poverty is self-perpetuating. We are poor because our people are lazy. I pass by a slum area every morning – dozens of adults do nothing but idle, gossip and drink. We do not save. Look at the Japanese and how they save in spite of the fact that the interest given them by their banks is so little. They work very hard too.

We are great show-offs. Look at our women, how overdressed, over-coiffed they are, and Imelda epitomizes that extravagance. Look at our men, their manicured nails, their personal jewelry, their diamond rings. Yabang – that is what we are, and all that money expended on status symbols, on yabang. How much better if it were channeled into production.

We are poor because our nationalism is inward looking. Under its guise we protect inefficient industries and monopolies. We did not pursue agrarian reform like Japan and Taiwan. It is not so much the development of the rural sector, making it productive and a good market as well. Agrarian reform releases the energies of the landlords who, before the reform, merely waited for the harvest. They become entrepreneurs, the harbingers of change.

Our nationalist icons like Claro M. Recto and Lorenzo Tanada opposed agrarian reform, the single most important factor that would have altered the rural areas and lifted the peasant from poverty. Both of them were merely anti-American.

We can tackle our poverty in two very distinct ways. The first choice: a nationalist revolution, a continuation of the revolution in 1896. But even before we can use violence to change inequities in our society, we must first have a profound change in our way of thinking, in our culture.

My regret about EDSA is that change would have been possible then with a minimum of bloodshed. In fact, a revolution may not be bloody at all if something like EDSA would present itself again. Or a dictator unlike Marcos.

The second is through education, perhaps a longer and more complex process. The only problem is that it may take so long and by the time conditions have changed, we may be back where we were, caught up with this tremendous population explosion which the Catholic Church exacerbates in its conformity with doctrinal purity.

We are faced with a growing compulsion to violence, but even if the communists won, they will rule as badly because they will be hostage to the same obstructions in our culture, the barkada, the vaulting egos that sundered the revolution in 1896, the Huk revolt in 1949-53.

To repeat, neither education nor revolution can succeed if we do not internalize new attitudes, new ways of thinking. Let us go back to basics and remember those American slogans: A Ford in every garage. A chicken in every pot. Money is like fertilizer: to do any good it must be spread around. Some Filipinos, taunted wherever they are, are shamed to admit they are Filipinos.

I have, myself, been embarrassed to explain, for instance, why Imelda, her children and the Marcos cronies are back, and in positions of power. Are there redeeming features in our country that we can be proud of? Of course, lots of them. When people say, for instance, that our corruption will never be banished, just remember that Arsenio Lacson as mayor of Manila and Ramon Magsaysay as president brought a clean government.

We do not have the classical arts that brought Hinduism and Buddhism to continental and archipelagic Southeast Asia, but our artists have now ranged the world, showing what we have done with Western art forms, enriched with our own ethnic traditions. Our professionals, not just our domestics, are all over, showing how accomplished a people we are!

Look at our history. We are the first in Asia to rise against Western colonialism, the first to establish a republic. Recall the Battle of Tirad Pass and glory in the heroism of Gregorio del Pilar and the 48 Filipinos who died but stopped the Texas Rangers from capturing the president of that First Republic. Its equivalent in ancient history is the Battle of Thermopylae where the Spartans and their king Leonidas, died to a man, defending the pass against the invading Persians.

Rizal – what nation on earth has produced a man like him? At 35, he was a novelist, a poet, an anthropologist, a sculptor, a medical doctor, a teacher and martyr. We are now 80 million and in another two decades we will pass the 100 million mark.

Eighty million – that is a mass market in any language, a mass market that should absorb our increased production in goods and services – a mass market which any entrepreneur can hope to exploit, like the proverbial oil for the lamps of China.

Japan was only 70 million when it had confidence enough and the wherewithal to challenge the United States and almost won. It is the same confidence that enabled Japan to flourish from the rubble of defeat in World War II.

I am not looking for a foreign power for us to challenge. But we have a real and insidious enemy that we must vanquish, and this enemy is worse than the intransigence of any foreign power. We are our own enemy. And we must have the courage, the will, to change ourselves.