The game starts with contestants answering trivia questions to collect “spins”. Later on, they’ll use those spins on a game board to win cash and prizes.

This “Luck Board” features 18 spaces that gets randomly highlighted during the game process. Contestants press a button to stop the moving light and they’ll win the prize indicated in the highlighted space.

The game was called Press Your Luck because as your accumulated winnings from the board goes up, the riskier it gets to continue playing because you might get a “Whammy”. This is a special space on the board and if the highlight stops on it, you’ll lose everything – cash and prizes.

When all the “spins” of the players are gone, the winner is the contestant with the most winnings. 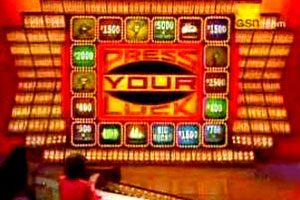 In June 1984, Press Your Luck had ice cream truck driver, Michael Larson, as one of the contestants. What started as seemingly another normal episode, ended up as one of the most-remembered game shows in television history.

Michael Larson had the genius idea to record the previous episodes of Press Your Luck and discovered that the game board was not random at all – it actually had five predictable patterns. He memorized those patterns over the course of six weeks, with the help of a VCR, and then went on to the show.

Michael played a “normal” first round. He even got a Whammy on his first try at the Luck Board. However, he was actually just testing the response time of the button and when the second round came, that’s when he began rolling in with the big bucks.

Below is a clip from that episode. It’s around 8-minutes long, but you can forward to the third minute if you want to skip the trivia questions, and see the beginning of Michael Larson’s incredible streak.

Michael Larson eventually used up all his spins and ended the game with a grand total of $110,237 in cash and prizes that day – the highest ever for the show and any television game at that time. 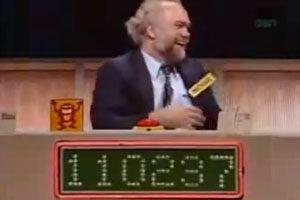 Michael Larson found a weakness in the system and exploited it. The producers of Press Your Luck and CBS tried to accuse him of cheating, but Michael Larson technically did nothing illegal.

In the end, the television network awarded Michael Larson his full winnings.

His performance eventually prompted the show to reprogram their Luck Board to prevent other contestants from gaming the system and avoid all this from ever happening again.

But his story did not end well.

Michael Larson invested his money in a real estate company, which later turned out to be a ponzi scheme. He also took part in other bizarre schemes and even tried to win in other game shows, but luck was no longer on his side.

Two years after he won, he lost all his money and was working in Wal-Mart.

Later on, he got involved in an illegal lottery scheme and spent the remainder of his life running from the law. He died from throat cancer in 1999 at the age of 49.

The sad reality of Michael Larson’s story is that – it’s a fairly common story.

How many times have you read about a lottery winner who lost all their money after a few years?

How many famous celebrities in the 80s and 90s – actors, athletes, artists – do you know who are now poor despite having millions during the peak of their careers?

The list is long, and the reason why this keeps happening is surprisingly simple: 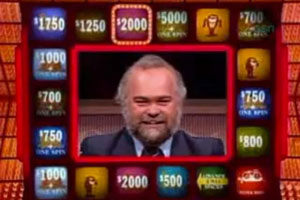 A lot of people don’t take care of their finances. They say there’s nothing much to manage anyway, so why bother? They believe that budgeting and learning how to invest should come when they have more money in the bank.

But the thing is…

That time won’t come unless you know how to manage your finances today.

And even if you’re so lucky to win a game show like Michael Larson, or win the lottery, or inherit a fortune from a long-lost relative, or become a famous celebrity – your millions in the bank will fade away as fast as you got it if you don’t know how to take care of it.

Money management is a skill we can all learn.

And just like any skill, it takes time to master it.

If you want to run a marathon, you can’t just sign up for the 42-kilometer event – that’s suicide. You start by training for a 5-kilometer run first, then 10-kilometers and so on until your body becomes strong enough to finish a full marathon.

If you want to run a multimillion fastfood chain, you can’t just put up 20 stores all at the same time – you’ll surely lose money. You start by opening just one store and grow your business from there, opening one branch at a time, until you’re ready to franchise and expand.