When I was a kid, I remember constantly watching a television commercial about Leonarda “Narda” Capuyan, the woman behind Narda’s Handwoven Arts & Crafts.

I think it was a public service message from the Department of Trade and Industry which tries to inspire Filipinos to also become innovative and entrepreneurial.

The commercial narrates the success story of Narda Capuyan. A family planning nurse who became a successful exporter & entrepreneur. 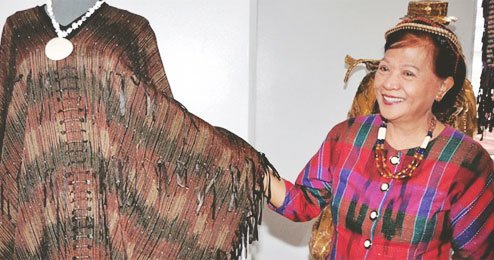 How it all began

In my recent trip to Baguio, I took some time to visit her shop in La Trinidad, Benguet. This was where it all began for Narda Capuyan in the 1970’s.

Back then, weaving blankets and recycling acrylic yarns were just a pasttime for her. Little did she know that her hobby will soon become the backbone of her business.

During that time, she encouraged the women of her town to take up weaving. This was her alternative method of family planning – to keep the women busy and distract them from further making babies.

She bought scrap yarns in garment factories for a small sum and gave it to the women for weaving. She then paid them for their work and took the finished products and sold it to her friends.

The strategy worked well and soon enough, her side-line became a full-time business and her women started weaving more than just blankets but also bedspreads, draperies and upholstery fabrics.

It did not take long before hotels in Baguio and Manila such as the Hyatt Terraces, Manila Hilton, Manila Hotel and others recognized the artistry of the handwoven crafts. Narda’s business slowly flourished.

To sustain the growing demand for the raw scrap materials, Narda Capuyan sought assistance from government agencies to help study the feasibility of business expansion and to apply for a business loan to finance it.

She got the support of the Philippine Board of Investments and other local business and trade agencies.

Later on, Mrs. Capuyan realized that there is a need for more readily available raw materials if she wants the business to survive and grow.

In 1975, she met Miss Ellen Schattsneider, a textile weaving consultant for Product Development and Design Center of the Philippines.

It was she who introduced Narda Capuyan to IKAT, a weaving technique which originated from Turkey and the Middle East where cotton threads are tie-dyed before they are woven.

Narda utilized the traditional back-strap weaving skills of the Ifugao in the Mountain Province to come up with a totally unique and exquisite design for her products.

She started exporting her products to the world market in 1978, Japanese and American designers initially came to buy from her. In 1982, Bloomingdale’s New York featured Narda’s products in an all-Philippine sales exhibition.

This eventually took Narda’s artistic creations to other parts of the globe including Germany, France, Hong Kong, Canada and Australia.

Her success garnered for her the Golden Shell Award in 1982. This is the highest recognition given by the Department of Trade and Industry to Filipino companies for Excellence In Exports.

Other recognitions followed including the Country Side Investor Award given to her by President Corazon Aquino and the Agora Award for outstanding achievement in export marketing by the Philippine Marketing Association.

World famous weaver, Narda Capuyan, died in March 2016. She was 73. To learn more about Narda’s Handwoven Arts & Crafts, you can visit www.nardas.com.