How do people spend money? When I thought about this question, I initially concluded that people would either be “thoughtful” or “careless” about their spending.

But world-renowned economist and academic, Milton Friedman, says that there are actually four basic ways that people spend money – and not just two as I’ve initially thought.

Below now are those four different ways, as enumerated by the Nobel Memorial Prize recipient, and some personal thoughts on how I believe these unique mindsets affect our own, others, and even the government’s spending habits. 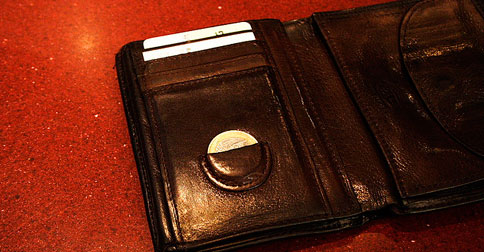 There are two factors to consider when looking at how one spends money. First is who owns the money and second is for whom the money is being spent.

The first factor dictates the economy of the decision, while the second factor affects the value and quality of the purchase. Keeping these in mind, we then arrive at what Milton Friedman concluded:

1. Spending your own money for yourself.

When the money is coming from your own pocket, to buy something for yourself – you will tend to economize but seek the best quality product that you can get. It’s quite common sense really… but is it?

How many times have you bought something and later regret the purchase because you realized that you could have had the same item at a lower price or there’s another better item? I assume it’s quite often, especially if you’re an impulse buyer.

2. Spending your own money for others.

This happens when, for example, you’re buying a birthday gift for your friend. A person’s basic attitude here, according to Friedman, is that one will tend to economize but he or she will NOT seek the best quality product.

For thoughtful gift-givers, this may not be true – but for the rest of us, I would have to say there’s truth to the claim.

3. Spending someone else’s money for yourself.

Going on a business trip at your company’s expense? Then I’m sure you’d seek the best products and services available without considering much of the price.

But this scenario doesn’t only happen in the corporate world – but also in families with dependent members who at times, would buy things that the breadwinner would have not otherwise spent for him or herself.

4. Spending someone else’s money for others.

When would someone spend somebody else’s money on other people? Think about the government that uses taxpayer’s money for the benefit of their constituents.

And judging from how Friedman defined the first three ways above – you’ll realize that this could be the reason why government spending tends to be so high but the service quality output is (usually) so bad.

The nature of this fourth spending does not economize and does not seek the highest value for the money. 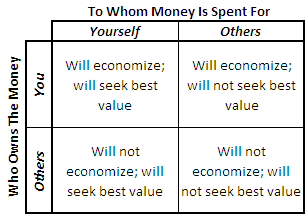 By considering all factors, I believe it’s important that we adopt the healthiest attitude of the four when it comes to spending money – and that is to always seek the most economical and best quality product and service that you can afford.

When everyone starts to think this way, regardless of who owns the money and for whom the money is being spent, I believe that change can slowly happen – not just for us, but especially for the country as well.

And it all starts within you – on how you spend your own money for yourself, on how you teach your children the value of money that you give them, on how you influence your family and friends on how they should spend money.