I came back from my Cambodia trip towards the end of last week.

And after catching up with the responsibilities I left behind, I’m happy to tell everyone that I’m now back to regular blogging. Hooray!

Anyway, last night, as I was sorting through my travel photos, I remembered some of the short but interesting conversations I had with the people of Cambodia during my four-day stay there.

Despite the language barrier, broken English and many cases of being “lost in translation”, I managed to have a handful of insightful dialogue that gave me a glimpse of how Cambodians think and feel – moments which I’m sharing with you below. 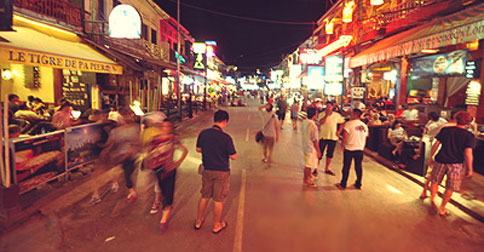 Night life in the city of Siem Reap happens along Pub Street and nearby areas. I stopped by one of the restaurants to look at their menu posted outside, a waiter saw me and asked, “Yes sir, dinner here very good.”

“No thank you, just looking. Friends want to eat over there,” I answered while pointing to the open-air eateries at the end of the street.

“Ah, barbecue there very good,” he replied with a smile. “Where you from sir? You from Philippine?”

“Yes, I’m from Philippines. How you know?” I asked.

“Ah, Philippine, same same as Cambodge,” he replied. As I understand it, he’s trying to say that Filipinos somehow look similar to Cambodians.

“Sir, your friends already calling you. Have a good dinner sir. Hope you come and eat here tomorrow. But if not, it’s okay.”

I smiled and thanked him for the chat, then I hurried to catch my friends. Unfortunately, we never had the chance to come back there to have dinner – perhaps next time. 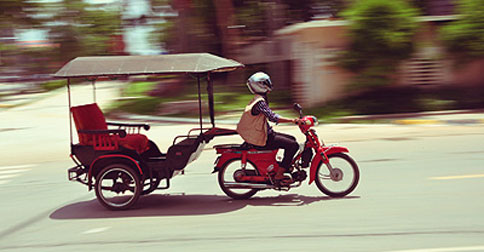 If you don’t fancy hiring a bicycle, then the next best way to go around the city is by Tuk Tuk. While waiting for the hotel Tuk Tuk to fetch me and my friends from downtown to bring us back to the hotel, another Tuk Tuk driver approached me. “Tuk Tuk? Only one dollar each.”

“No thank you. Waiting for hotel Tuk Tuk,” I answered.

“Oh… driver busy, I take you hotel. You rest early. No more waiting, yeah?” he replied, trying to convince us to take him instead.

“Okay, but if driver not come, you ride my Tuk Tuk okay?”

“No promise,” I answered, trying not to keep his hopes up.

After a few minutes, he comes back with a cup of coffee in hand. “If I finish coffee and hotel driver not yet here, you ride my Tuk Tuk okay?” he bargained.

“No promise,” I answered. “But where did you buy coffee?”

“Over there,” he answered, then points to a beverage cart at the side of the street. “I buy you coffee free, but you ride my Tuk Tuk, okay?”

At that point, I laughed, amused at his persistence. I declined his offer for free coffee, but I did agree to ride his Tuk Tuk if our hotel driver fails to come.

Interestingly, after a few minutes, me and my friends decided that we can’t wait any longer. However, the persistent Tuk Tuk driver was already gone with another passenger. 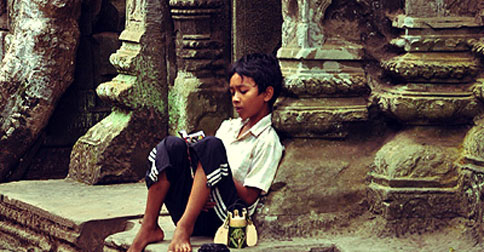 Ta Prohm is where most of the scenes from the movie, Lara Croft: Tomb Raider, was shot. And like in most major temples, Cambodian children would often hang around to sell souvenirs to tourists.

A boy reading in one corner, who seemed to be minding his own business, caught my interest. I approached him and asked, “What you reading?”

“Temple book of my brother,” he replied.

“No, for tourists. I want to be tour guide – big money. Souvenirs, small money only,” he answered.

“Brother a tour guide?” I asked.

At that point, I decided to leave him with his reading, but not without giving him first a reassuring nod and a smile of admiration at his focus and dedication to learn. 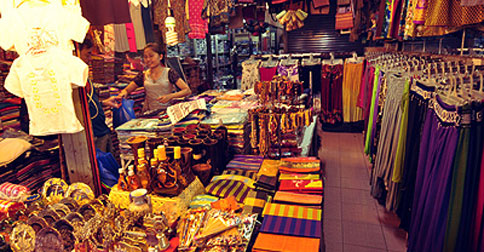 The place where you can practice your haggling skills for souvenirs. In one of the stalls, where I was trying to haggle for t-shirts, a conversation between me and a saleslady went like this.

“Three dollars,” she answered. “But I give discount, how much you want?”

“One dollar,” I replied.

“One dollar, no profit. I give you two dollars,” she negotiated.

A few months back, a friend of mine who went to Cambodia was able to buy shirts at $1.50, so I knew they could sell it at that price.

However, less than P100 for a good quality souvenir shirt was already a bargain for me. I could haggle more or look for another store but I really didn’t want to be much of a cheapskate.

So in my mind, I’ve decided to agree on $2.00 for the shirt. But before I reached for my wallet, I turned my head away from her because I just wanted to see where my friends are.

Thinking that I was about to leave, she said: “Okay. I give you one dollar fifty.”

I let out a wide smile of amusement and bought several shirts.

More than the ancient temples, rich culture and cheap shopping finds – I believe that the kindness and gentleness of its people is Cambodia’s best treasure.

It was a truly unforgettable vacation for me – an experience that I would surely continue to tell and constantly reminisce.

Remember that you too, can travel and see the world when you have time and financial freedom. Start your journey within yourself and let Ready To Be Rich be your guide. Start by subscribing to new articles here.