Around a month ago, Robert Kiyosaki asked if anyone would be interested to receive a complimentary copy of his latest book, Why “A” Students Work for “C” Students.

Bella, my friend, encouraged me to fill up the online form and see if I’d be among the lucky chosen few.

After a several weeks, and about a couple of days after its official release, I surprisingly received a copy of the book right outside my doorstep! Wow!

To thank my friend for telling me about that opportunity, I lent her the book so she could read it first. And below, is a guest post and her book review of it.

So let’s now read what she has to say: 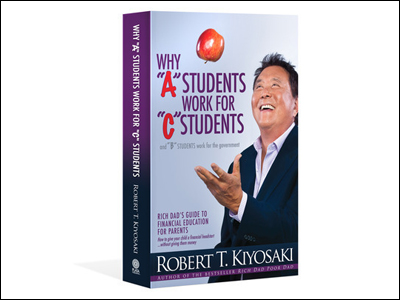 This book claims to be the most important book the author, Robert Kiyosaki, has ever written. It may very well be true as this book is about the future of today’s children. Kiyosaki is known as the author of self-help and build wealth book, Rich Dad Poor Dad – known as one of the best personal finance books of all time.

In this new book, Kiyosaki tackles issues relating to:

Unlike past books which were self-focused, in this book Robert steps aside to focus on others – the next generation of adults. Many people today want to be their own bosses, but very few will actually jump at the opportunity to be entrepreneurs. According to Kiyosaki, the underlying cause of this is – fear. Fear of losing job security. Sadly, schools use fear to teach children today.

As sending a child to school gets more and more expensive, ironically, it’s still not enough to guarantee their success once they enter adulthood. That’s why parental roles are more important now than ever.

I like how this book is very interactive. Don’t be intimidated by its thickness. It’s got big text, lots of pictures and simple drawings to make confusing subjects appear simple. On the side of most pages are dialogue boxes of relevant trivia. At the end of every chapter is also an Action Step for Parents which provides practical suggestions on how to impart financial knowledge to children.

Robert has a style of simplifying. He poses questions like, how many sides does a coin have? Many would say two – heads or tails. From this perspective, there’s only two sides to the story, only one right answer, and if you don’t get it you’re wrong.

But in real life, there are many answers. A coin has not just two sides but three – the edge. Robert creates this image to define financial intelligence – when you can stand on the edge of the coin and are able to see multiple perspectives and decide what’s best.

Now that I have mentioned the pluses, on to the minuses. If you have previously read Rich Dad Poor Dad, then you will notice that this book repeats many concepts and stories from the first book, which is like watching episode reruns, you either really like them or turn the TV off.

But for those who haven’t read any Rich Dad book, this is great news and you’ll likely chuckle at Robert’s rule of thumb when explaining complex ideas – use simple words that even a six-year-old would understand.

Another downside for international readers, is that this book is written in the American setting. Although most tax and real estate laws are similar around the world, there are a few tax “loopholes” mentioned in the book that’s only applicable in the U.S. Nevertheless, it’s an interesting read that would get you pondering over what legal options do we have available in our own country?

One last thing, don’t be surprised if you find typos in the book. As an example, public companies is misspelled as pubic companies. Poor copy editing seems to be a trademark of the Rich Dad Advisor Series, and in my humble opinion, is done on purpose to show why Robert is a best-selling author, not a best-writing author.

If you are a parent, or soon-to-be one, if you have dependents, then this book is a must-read. A word of caution, this book has in-your-face ideas which some may find offensive. However, it is written in such a way that you feel a genuine concern for what’s in the future.

Why “A” Students Work for “C” Students is for anyone who wants to learn the ability to stand on the edge of the coin and see more than one point of view on the subject of money. Anyone who wants to improve their financial intelligence should read this book.

This guest post was contributed by Bella, a mom who is an advocate of homeschooling. You can visit and read her blog entitled, Taumbahay.