I was waiting in line at the bank the other day when a thought came into my mind. How fast can one peso turn into a million through doubling?

Anyway, seeing that I was still far from the bank teller, I took my thoughts further and came up with ways on how to become a millionaire by using the doubling method. The process was quite interesting and here’s what I discovered:

How do you start? From zero to one peso

I thought it would be cool to say that before I became a millionaire, I started with nothing in my pocket. So I said to myself, how do I earn P1 from nothing? Of course, I could simply ask a friend for it. 🙂

Immediately, a financial lesson came to mind: Leveraging on OPM or Other People’s Money. You might be interested in learning how I discovered the power of OPM in my article entitled Checkmate.

I can continue asking other friends for a peso until I have P16 but that wouldn’t be so nice. So assuming I was able to get P4 from friends, what can I do now to double my stake?

And then I thought – I could perhaps buy some candies and sell them for profit. Steps 1 through 4 are done! 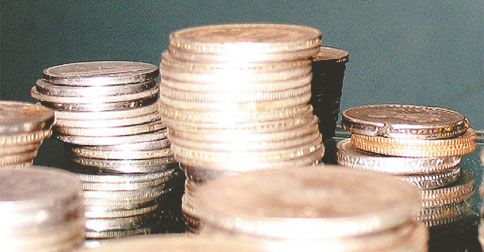 Fresh from the idea of buying and selling candies, I decided to expand my venture to snacks and junk foods. Now that I have higher capital, I can purchase more marketable items such as snack foods and sell them to friends.

I remember an officemate who used to sell these stuff at work and he made good income out of it.

As the amount of my stake grows, more and more income opportunities come to mind. I’m sure you have your own list of things you can buy and sell.

If you were to ask me, at this stage – I’d go for selling cellphone credits or eload. It’s a sideline business with very low capital and a readily available market. My brother earns a net of around P2,000 a month just by selling eload in his office.

So far, I’ve been doubling my money by selling online and offline. What else can I do to make money? And then I thought, freelancing is always a good idea.

I can use the money to perhaps learn a new skill or hobby that I can turn into an income opportunity. This was what I did back then when I first bought a book on Visual Basic programming and started making custom applications and software.

As you go further, doubling money actively would become too exhausting and time-consuming. I believe that the financial strategy should change at this point. This means considering low and medium-risk investments to passively make the money grow.

Aside from acquiring paper assets, I can also leverage on multi-level marketing companies and direct selling networks.

At this point, my train of thought was interrupted by the fact that I’m already next in line at the bank. So I had to somehow let go of my thoughts and attend to my errand.

But now, I’d like to ask you, if you had more than a quarter of a million, what would you do to turn it into a million? I remember a few years back, I bought a business with this amount of money. It hasn’t doubled yet but I’m optimistic it will happen soon.

In conclusion, I’ve realized that doubling a peso until it becomes a million cannot just happen instantly. It takes planning and a good amount of consideration of your personal abilities, skills, and level of tolerance against risks. I believe that only through this slow but sure process can one assure himself of long-term wealth.

Also, if you’d noticed, I didn’t actually double my money through one transaction but really used my stake to earn small profits until I reach the next step. I simply used the doubled figure as my objective. Doing so made it easier for me to make more realistic plans.

Lastly, I learned that every stage requires different strategies to achieve the goal. This proves the importance of continually educating ourselves. I believe that our level of financial literacy is the prime factor that determines how much we can achieve financially in our lives.